Attend our virtual open house on April 6th and in person meet and greet April 27. Email membership.jas@gmail.com for more information.

OR
Download and submit your application to membership.jas@gmail.com
2021 Membership Application Word Doc:
shorturl.at/xBMSU 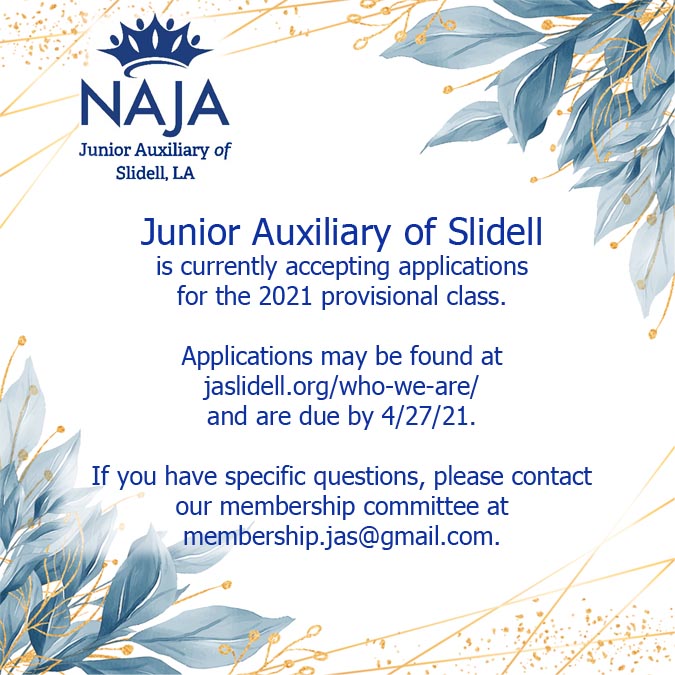 In 1960, the city of Slidell, located on the north shore of Lake Pontchartrain, in St. Tammany Parish, Louisiana had a population of only 6,356.  By 1965, Slidell had grown to an official population of 13,000. This growth was the result of the Michoud Saturn Rocket installation. When it became apparent that the growth of Slidell was increasing by leaps and bounds, many women were anxious to make a place for themselves in order not to feel like newcomers.

On October 20, 1965 a group of 15 women, with the common interest of wanting to help the needy and underprivileged, gathered together.  From this meeting evolved the organization known as the Slidell Service League.  The first meeting of the Slidell Service was held on November 30, 1965 and included its first membership composed of 46 women.  These women elected officers and adopted a constitution.  The original forty-six women were either natives of Slidell or wives of Michoud executives. The Slidell Service League was officially established on December 5, 1965.

The Slidell Service League went to work immediately with the Special Education Class at Slidell Elementary School. The class needed immediate financial and physical help. Each week several members would go into the class and teach art, crafts, and music.

And the Legacy Continues…

Today, the Junior Auxiliary of Slidell is a not-for-profit, charitable, and educational organization comprised of approximately 42 women dedicating their hearts and hands to the children, teens, families of need, and elderly of the Slidell community and it’s surrounding areas through 9 diverse service projects and a College Scholarship program.  All projects are directed toward enhancing the quality of life of the people we serve.

Membership is typically through past and present member nominations.  Each member is required to successfully complete a training period in a Provisional status.  Following the provisional training, a member transitions to formal Active status which requires a commitment of 5 years of active volunteer service.  All members must complete a minimum of 50 hours of volunteer service each year.