Sandra Chavers (JAS Class of 2011) has been appointed to be a Chapter Support Coordinator for Region VI which includes the Slidell Chapter.  Sandra has served as an Active member of JAS and logged hundreds of service hours working on several projects the past five years as well as serve on the JAS Board.  Now as an Associate member she continues to serve on the national level working with other chapters to help them continually improve.  JAS would like to congratulate Sandra and wish her well as she embarks on this new endeavor.

Deb Jones and Judy Heimbuck attended the Chamber’s Women in Business Luncheon.  Chrissy Miller gave an inspiring talk entitled P.I.E. which represented PASSION, INFLUENCE AND EMPOWERMENT.  Have passion for what you do.  Use your influence to make a positive difference.  Empower others to get the job done and give them the credit.  In the end make a traceable imprint to make a difference.  It was a beautiful day on the bayou.

May 5th and 6th JAS members enjoyed an educational and fun weekend in Memphis celebrating the 75th Anniversary of the National Association of Junior Auxiliary (NAJA).  Outgoing President Jeanne Hildebrandt opened the conference with a welcome address.

Our first speaker was country singer/song writer Jimmy Wayne who wrote “Do You Believe Me Now”.  Besides singing for us he shared his story about coming up through the foster care system and the people who influenced his life the most.  After becoming successful he walked from Nashville to Phoenix in 2010 to help raise awareness for kids who age out of the foster system and become homeless.  He has authored his memoir, Walk to Beautiful, and written a novel and made-for-TV movie, Paper Angels.

The awards banquet included the Parade of Presidents, Presentation of Roses to all past and present chapter presidents, entertainment from Elvis, award presentations and the installation of the 2017-18 NAJA Board of Directors and Incoming President Charlotte Jones.

After the banquet an after party and reception for Jeanne Hildebrandt was hosted by the Slidell Chapter.  Make plans to attend next year in Mobile, AL on April 27-28 at the Renaissance Mobile Riverview Plaza Hotel – Mobile Convention Center.

Junior Auxiliary members served at Kid’s Fest in Heritage Park at the petting zoo and pony rides.  The proceeds of the festival went to Riley’s Bikes,  an organization that allows “Kids to be Kids” by providing adaptive bikes to children with special needs.  Go to http://www.rileysbikes.org for more information. 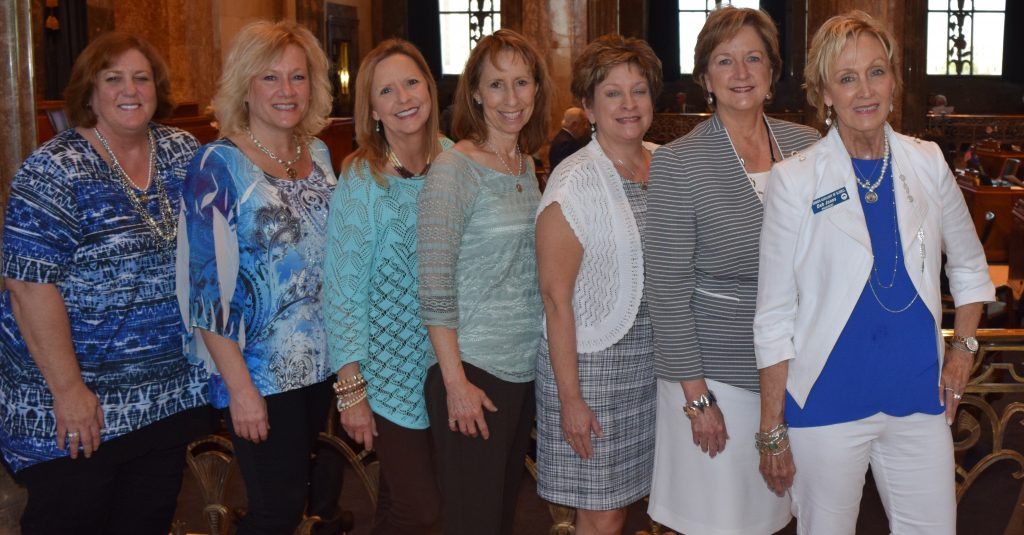 Members of Junior Auxiliary traveled to Baton Rouge as special guests of Senator Sharon Hewitt.  They enjoyed a tour of the capitol, lunch with Senator Hewitt and a walk to see the Capitol Park Museum.  Later in the afternoon members attended the senate session at which time Senator Hewitt read a resolution recognizing Junior Auxiliary Week and commending Junior Auxiliary of Slidell for 51 years of service to the greater Slidell area through the many projects designed to meet the needs of the community.  Special thanks to Senator Hewitt for an extraordinary day. L-R: Judy Heimbuck, Becky Rampon, Sandra Chavers, Barbara Gravois, Jeanne Hildebrandt, Senator Sharon Hewitt and Deb Jones.

It is a bittersweet goodbye to the Class of 2011 affectionately known as  The Dream Girls because their Provisional class project was filling bags with a stuffed animal, blanket, book, crayons etc… for children to receive when they arrived at the homeless shelter for women.  This class was instrumental in developing several projects such as Know You Child, Spelling Bee, Happy Feet and Cyber Seniors.  Many Dream Girls were on the Executive Board and chaired several committees and projects each year.  They have now  graduated to Life and Associate status in the National Association of Junior Auxiliary.  We thank them for their outstanding service!

Junior Auxiliary of Slidell (JAS) proudly welcomed twelve local women who completed their Provisional requirements and were sworn in as active members on April 4th during the General Meeting and Installation Dinner at Pinewood Country Club. These ladies were in training from October through March and have participated in Chapter meetings, projects, and fundraisers.

This dynamic group of women has released a new project to the community called Children’s Life Skills in which they developed a curriculum with 8 templates of topics and activities for children from 6-18 years of age.  They launched this project at the Boys & Girls Club for their “no homework” Fridays. Professionals from the community are recruited to be presenters who offer age appropriate talks and demonstrations and JAS members prepare and implement hands on activities to engage them in healthy lifestyles and attitudes.  They are now ready to volunteer their time to their community through the JAS organization for the next five years.

Lori K. Aucoin, originally from Hazlet, NJ, is married to Stephen Aucoin and they have two daughters, Valerie and Victoria.  She has an MBA from Loyola University and a BS in Computer Science and has been employed as a computer programmer.  Lori has lived in the Slidell area for 30 years and is a member of Aldersgate United Methodist Church.  She is involved with Slidell Little Theatre and this year’s Project Graduation.  Hobbies include running, biking, kayaking and spending time with family and friends.

Cathy Dedert is married with two children, Delaney and Reagan.  She is a native of St. Louis, MO and has lived in the Slidell area 1 year.  She has a BS in Community Health Ed. and has been employed by Medicus Healthcare Solutions.  Cathy is a member of Church of the King and her hobbies include running and working out.

Tanya LeGaux Encalarde is married to Eddie Encalarde, JR. and they have two children, Aidan and Addison.  Tanya was born and raised in New Orleans, has a BA in Psychology and M. Ed in Counseling (Mental Health).  She and her husband own and operate Camellia Title and Encalarde Law Firm in Slidell where she has lived for 20 years.  She is a member of St. Luke the Evangelist Catholic Church.  She is active in her local PTA as the Chair of Hospitality, a member East St. Tammany Chamber of Commerce and Chamber One Networking Group.  Her hobbies include reading, gardening, and traveling.

Karen Durany Gould, originally from Pennsylvania, is married to Richard Gould and has lived in the Slidell area for 25 years where she is employed by Thrivent Financial as a Financial Advisor.  She attended California University of Pennsylvania and the University of New Orleans to attain a BS in Business Administration.  She is involved in East St. Tammany Chamber of Commerce, Chamber One Networking Group and directs the hand bell choir at The Village Church – Lutheran.   She loves to read, bake, travel and cross stitch.

Yeon Ham is a native of South Korea and is married to Jong Ham.  They have two children Amy and Jenny, and have lived in Slidell for 2 years.  Yeon has a BS in Early Childhood Education from Georgia State University and she was employed as a teacher while living in Georgia.  She attends Church of the King and is involved in Northlake Tennis League, Book Club and Slidell Newcomers Group.  She enjoys playing tennis, reading, hiking, yoga, and traveling.

Lisa Kutcher is a Metairie native and married to Matt Kutcher.  They have lived in Slidell for 3 years.  Together they have three adult children Taylor Jeanine, Matthew James, and Zackary Daniel.  She has her BSN from William Carey University and was employed as a nurse for several years.  She and her husband own Spectrum of NOLA Inc. where she works as the Office Coordinator.  She is a member of Celebration Church in Metairie and enjoys wake surfing, scuba diving, paddle boarding, and reading.

Barbara Murphy was raised in New Orleans, LA and has lived in the St. Tammany Parish area for 39 years where she raised two sons, William and Anthony. She attended Delgado Community College studying Horticulture and acquired certifications as a Strategic Planning Facilitator and Floral Designer. Barbara is retired from Jacobs Technology, Inc. where she served as supervisor of the Education Department supporting the NASA Office of Education at Stennis Space Center, MS.  Hobbies include gardening, floral design and crafting.

Catherine Wood Newman is married to Chip Newman and is a native Slidellian. She has a BA in Graphic Design from LSU and is currently employed at Fastbadge in Slidell. Cathy is a member of The Village Church – Lutheran and served on the Church Council and as a Youth Counselor at other churches. Other previous community involvement includes the Slidell Art League and as a Habitat for Humanity volunteer. Hobbies include painting, pottery, and writing.

Charmaine Seymour, married to Vernon Seymour, has been a resident of Lacombe, LA for 21 years and has three children, Victoria (14), Nichole (34) and Joseph (35).  She is employed as a Mortgage Officer for Bank of England Mortgage.  Charmaine is involved in the community as a Chamber One Networking moderator and volunteers for both Habitat for Humanity and Girl Scouts.  She loves gardening, working out and cooking as well as grandma time with her two grandsons, Mason and Clayton.

Natalie Coker Smith is originally from Pascagoula, MS and has lived in Slidell for 15 years where she and her husband, Mike, are raising their two children, Max and Campbell.  Natalie has a BBA from Mississippi State University and is employed at Farmers Insurance Exchange as a Claims Adjuster.  She is a member of St. Luke the Evangelist Catholic Church and enjoys yoga, reading, and being a CCD substitute teacher.

Marina Cabarcas Stevens is a native of Colombia, South America and has lived in Slidell 24 years.  She and her husband, Jim, have two daughters, Christina and Victoria.  Marina has a Masters in Architecture and is a realtor with Latter & Blum, Inc. as well as Drafting and AutoCAD teacher at Salmen High School/Northshore Technical Community College.  She is a member of St. Luke the Evangelist Catholic Church as well as Camellia Club, Le Cotillion and the Foreign Born Wives Club of Slidell.  Her hobbies include yoga, dance, tennis and traveling.

Christy Wood is married to Matt Wood, and together they have a son Easton.  Originally from Georgia, Christy received a B.S. in Elementary Education and is employed by the St. Tammany Parish School Board as a full time teacher and she is a member of the PTA.  She has lived in the Slidell area for 34 years and is passionate about family, health and wellness.